People ask me all the time, why do you live life the way you do? One simple word, freedom. It’s a choice one makes in life about how they want to position themselves in society. There is a fine balance between those who do things and follow a specific way of life because they care what others will think, say on them and their choices; and others who say we are this like it or move on.

My online presence is not a random decision, I positioned myself to do this lifestyle. A little history about me, I grew up without a father, he died when I was very young, and did not live on the straight and narrow. My mother was single most of her life.

I speak three languages: polish, english and french. I grew up and was born in Montreal, Quebec. I met my long term (since high school) boyfriend there and over the years we have gone through life and it’s curveballs. We come from two extremely controversial backgrounds, mine Jewish and his Muslim. His first name Ziyad mine Barbara, he was born in Kuwait. These names are a past life that evolved into new persona using our middle names Isydia Boone and Kissra LynnKay.

This extensive difference in culture and background strengthened our relationship and geared us to where we are today. We are human beings living on planet earth, that being said we ceased any connection with background as it conflicted in our decision to be free. My tattoos and expression of sexuality online are a philosophical portal indicating our awakening evolution throughout our years together.

Growing up in a time with no internet, strong society image and family culture it was a tough choice to distance ourselves from those obstacles, as most people around us followed the traditional society imposed life. Our idea was to gain more from life than what was the norm at the time, which was education, marriage followed by children. Thus, we chose not to have kids, but the marriage idea seemed plausible as we loved each other very much. However, since family, religion and culture were not aspects in our life, how do you marry? Which "priest" to choose? Our sole remaining choice was a civil ceremony held in a courtroom and legalized by a justice of the peace; which we quickly saw as nothing more than a contract with the government holding us together. So, we concluded that our love keeps us together not an official paper.

We went through a myriad of phases throughout our years together, by moving out on our own in Montreal and starting with the corporate image life, spending money without saving for a rainy day. Life in a downtown city like montreal was fast paced and image/ money oriented. Eventually, the decision was made to walk away as there was money but, no time to actually sit down and enjoy.

We ended up leaving Montreal, selling our furniture and taking with us whatever items that fit into our car. At that moment, not only our voyage to a new life began, but, we walked away from family, the values instilled in us growing up. It was a reality the moment we got in the car and drove.

Our original plan was to drive to Vancouver and on the way get odd jobs make some money and continue; as we did not save for a rainy day. Along the route, we stopped in Winnipeg, Manitoba as it appeared to us laid back, basic with the ambiance of a mid sized town inside in a city. We discovered a temp agency known as Labour Ready, which did not exist in Montreal; they provided daily temp positions mainly in manual labour positions, paying cash in the same day. Isydia applied there and took on several day jobs, until one day he was sent to a steel company, where the foreman onsite liked his work and hired him.

Winnipeg allowed us to gather our thoughts and settle down from the high life of Montreal. During this time I worked in call centers while Isydia worked at the steel company. We did have some time to eat at restaurants, frequent clubs, play pool. We met a ton of different people, and learned new life experiences.

Isydia used to crane steel plates at the company he worked at and at times load them onto flatbed of semi trucks. One night, a trucker came to get loaded and was told it would be considerable time before he would be done, the trucker just said "knock on my door to tell me you are done". It was then Isydia’s curiosity peaked and he decided to ask the trucker why he doesn’t leave and return later. The trucker showed him the inside of his truck, and it looked like a house. There were upper/ lower bunk beds to sleep, a fridge, a small T.V.

Isydia took some pictures and later that night presented the idea of becoming a trucker to me. We decided to research the idea more carefully, which resulted in Isydia leaving his steel job, and pursuing a new endeavour in trucking.

My boyfriend and I came from high class well educated families, both are well traveled and financially stable. Neither families were religious; but you can say moderates or non following. However you view it, we came from backgrounds of contrast, our life choices are based on solely our decisions not due to having disadvantaged families. After lengthy talks, we realized that as long as we cling to the past our present will never be ours, thus we agreed to choose our own path so we moved on and let go our past life and without looking back. Here are some pix with my mom when I was tiny :)

These phases of evolution throughout our years together, made us strong and we are always two facing the obstacles and incentives as one WiiR1. 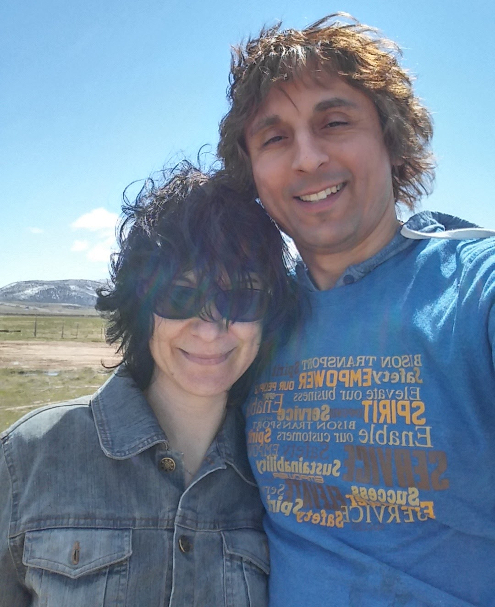 The Coven is my Close Fans Circle